A funny thing happens every May, I find myself feeling a bit nostalgic and remembering my senior year of High School. Not in an Uncle Rico/Napoleon Dynamite way but more so as a Bethel moment in my life. In Genesis 35 we see where God told Jacob to go “to Bethel and dwell there. Make an altar there to the God who appeared to you when you fled from your brother Esau.” So Jacob said to his household and to all who were with him, “Put away the foreign gods that are among you and purify yourselves and change your garments. Then let us arise and go up to Bethel, so that I may make there an altar to the God who answers me in the day of my distress and has been with me wherever I have gone.” (Genesis 35:1-3)

My senior year is reminder to me of the joy that came as a result from the Summer before when I cried out to the Lord, on a beach in Gulf Shores, Alabama, that I was tired of being comfortable in the fact that I was saved (I had been since I was 9 years old) but I wanted to truly live for Christ. I didn’t want to just do the right thing because it was the right thing to do or because it was expected of me, I wanted it to be a natural response to my walk with Christ. From that night on, everything has been different. On the drive back to Memphis, I was reading the Psalms and came across these verses in chapter 30, “10 You have turned my mourning into joyful dancing. You have taken away my clothes of mourning and clothed me with joy, 11 that I might sing praises to you and not be silent. O Lord my God, I will give you thanks forever!’ I truly believe that Summer changed the whole trajectory of my life and it was evident all throughout my senior year in High School.

I was one of those who hated school. I might have looked forward to it for a bit but after a few weeks, I was over it. I didn’t fit in and I went to a private Christian school. While I longed to be accepted, I did the exact opposite – I called people out for things that they shouldn’t be doing and had no problem turning a guy in for making suggestive gestures with his hands towards me during Bible class.  That was 7th grade and I remember being confronted in pick up line by an older friend about how I was wrong for getting him in trouble … after all, it wasn’t that big of a deal. I looked at her, told her it was inappropriate and I wasn’t going to let a guy do that to me.

In 8th grade, I had instigated a situation with a guy that ended with him calling me a “Fat B****”. A lifelong guy friend immediately came to my defense. I can still remember the horror I felt as I turned to see two guys that I had sort of had a crush on looking at me at what I assumed was through the lens of his words. I believe I apologized to that guy for instigating that situation … I should have if I didn’t. I have no idea if he apologized to me for what he said, I think my friend made him but it didn’t matter. Those were his true thoughts about me and it has stayed with me for the rest of my life. Not so much the witch part because I have those moments but the “fat” part. I just knew if this guy was gutsy enough to call me that to my face then he only said what everyone was thinking about me. 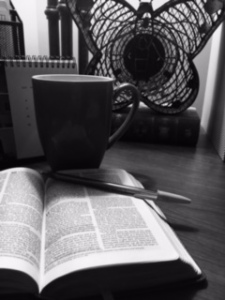 encouraged to do something about that. I just smiled and said something like, “People are going to think that no matter what I do but I’m not going to change who I am.” I think I got that title because I asked someone to stop cussing around me. LOL. In many ways, I am in awe of my courage back then because I thought I was weak. I know I came off as a holier-than-thou know-it-all at times and truly regret that as I was simply in a place of figuring out how to walk with and live for Christ.

My senior year, I learned to love everyone. I became “friends” with just about everyone in our class. Meaning I made a point to talk to everyone at some point during the year. I didn’t hang out with them outside of school but I didn’t shun talking to them and I think they discovered I wasn’t that bad either … I just had my convictions and stuck to them. I didn’t apologize for my convictions but I also didn’t impose them on anyone else. I just didn’t care about how people thought about me anymore. It was an incredibly freeing time in my life. The Lord brought some precious people into my life that year several of whom I am still in communication with today. He opened up some unique doors for me that I would have never dreamed possible. Things that I still marvel at to this day.

However, what many do not know was that Satan had been an almost constant companion up until the Summer of 2001. He spoke the harshest of words to me and he still does. He loves to throw in my face the things I have missed out on because of my convictions.

But let me be perfectly clear, I have zero regrets over saying “no” or avoiding the temptation altogether to compromise on my convictions in the last 16 years.

It’s the moments that I gave in that I regret. It’s by God’s grace alone that I am still completely saving myself for marriage and if I never marry it will be worth it all. Satan and the world want you to think that it isn’t worth it all but it is. Every day I am becoming more and more convinced that the things of this world simply cannot satisfy me. When I have tried to fill myself on those things they have left me empty, aching and more alone than I was before. It’s a temporal satisfaction if there is any satisfaction at all so you have to fill yourself with more when in reality you are depleting yourself. Paul said it best in Philippians 3:8, “everything else is worthless when compared with the infinite value of knowing Christ Jesus my Lord…”

To my young friends who are graduating this May,

It’s true … you get to completely rewrite your story from this point on. How people in school knew you for the last 12 years does not have to define how people will know you from this point forward. But none of that matters apart from a relationship with Christ. I came into my “own” after High School. I found my own sense of fashion, my own sense of humor and for the most part have accepted myself. Satan has come against me hard over the years but the Lord has remained faithful in my life and has given me the victory in those battles. One battle I am just now emerging from after seven years and that’s a story for another day. But I can tell you that nothing you face will ever be greater than the love and power of Jesus. Do not miss out walking with Him on a daily basis as it to will change the trajectory of your life.

I love you all.

View all posts by melodyfaithm